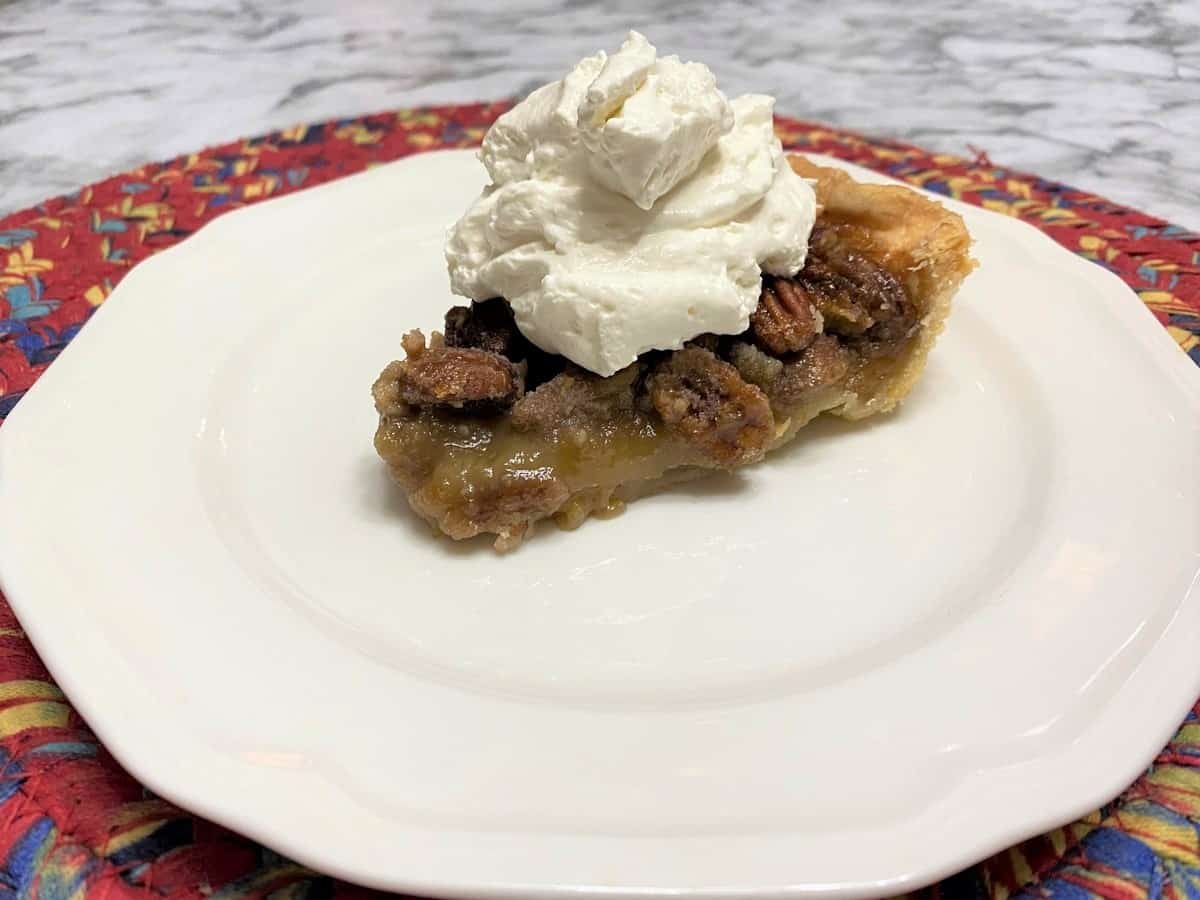 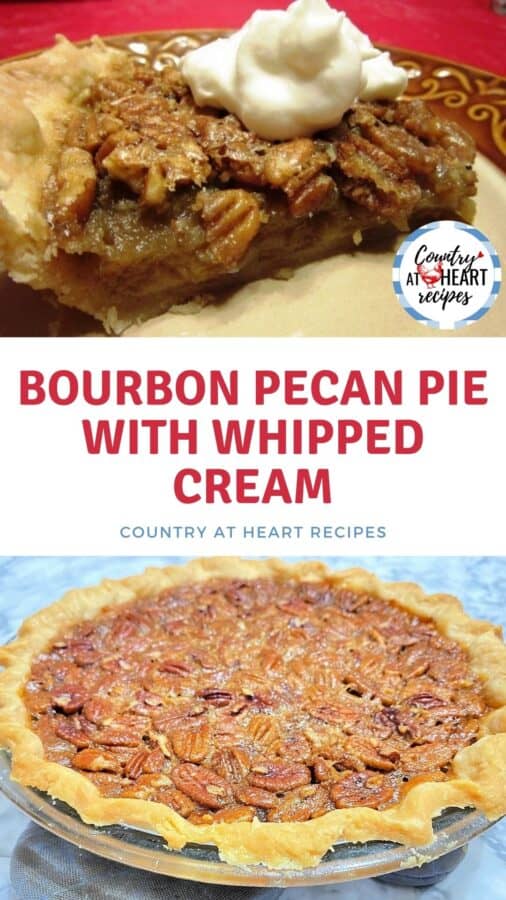 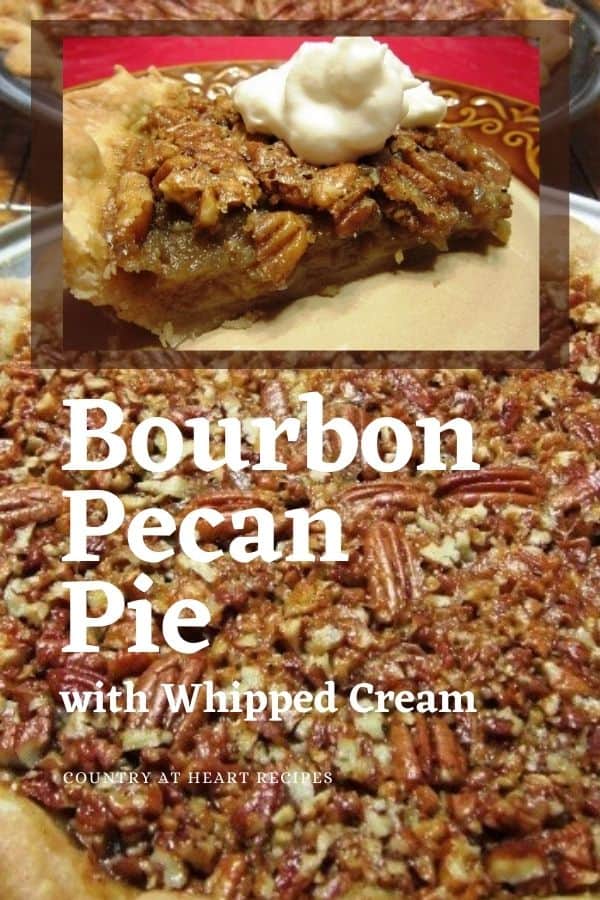 Bourbon Pecan Pie with Whipped Cream is perfect for the holidays or for family gatherings. Our family loves this recipe. Rich, buttery filling loaded with pecans and just a hint of bourbon flavor, topped with a light whipped cream. Simply delicious!

Years ago, my husband brought home a bottle of whiskey (I think it might have been Jack Daniels) that he’d found at the base of a tree on an elk hunting trip in Colorado. The bottle sat in my cupboard for months, and then I decided to try putting a little in my pecan pie. Then I thought, what the heck, why not put some in the whipped cream, too! 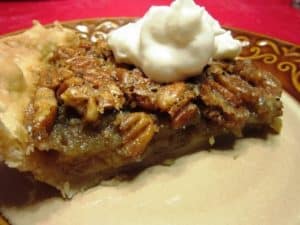 That was the first time I’d cooked with alcohol, and it was the last time I made pecan pie without bourbon. Now, I know that not everyone wants to cook with alcohol, so it’s perfectly fine to leave these portions out of the recipe. It will still be good. No worries. But if you’d like to experiment with your taste buds, go ahead and give it a try!

A Note about Bourbon

I am no authority on bourbon, so I asked my sons in law what brands they would recommend. They suggested Jim Beam, Evan Williams, or Ezra Brooks for inexpensive brands that would still be good for cooking. I know that when you cook with wine, you want to cook with as good of wine as you would drink. I don’t know if that holds true with bourbon or not.

Did you know that Bourbon can only be made in America? And that it tends to be sweeter than Whiskey? Which makes it easier for drinking and nicer for cooking. Just a little trivia for you.

Instructions for Making This Recipe 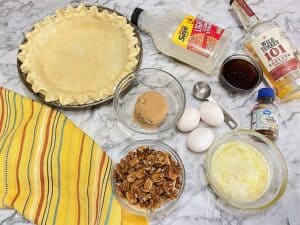 Preheat oven to 400 degrees. Gather your ingredients so that you have everything close at hand. 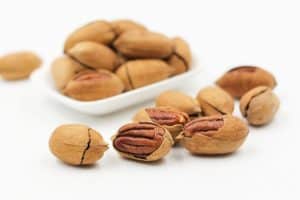 If you have access to freshly picked pecans, this is the perfect recipe to use them in. I get our pecans from Circle’s Pecans and Country Store, a family-owned pecan shop in our area. Their thin-shelled pecans are so easy to pick out, and they are big and tasty. They also sell freshly baked goods and have other fun items for gift-giving in their shop. 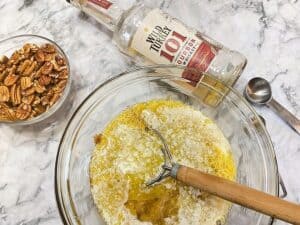 Stir in 1 cup of chopped pecans. Set aside until ready to use.

In a medium bowl, mix together the all-purpose flour and salt. Using a blending fork, cut in shortening. Add water in two parts, mixing until ingredients form a nice dough. 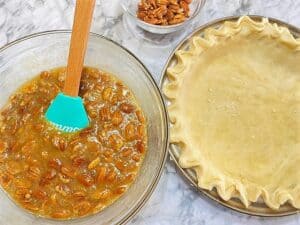 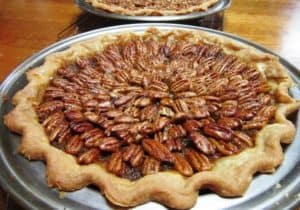 If you’re feeling artistic, go ahead and create a pattern with the halved pecans. Our youngest daughter made this design for her 4-H food project one year and won grand champion on this recipe (sans bourbon).

Bake the pie on the middle rack in a preheated 400 degree oven for 15 minutes. Reduce temperature to 350 degrees and continue baking for 25-30 minutes longer until lightly browned and puffed across top.

Remove from oven and allow to cool before serving.

Cover and refrigerate until ready to serve. 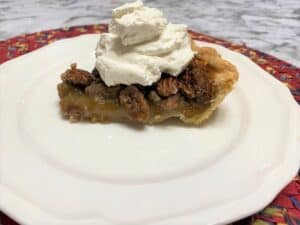 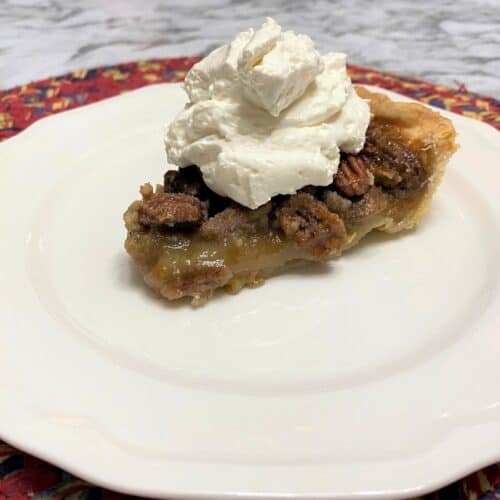 *Unless otherwise indicated, all butter used on this recipe site is salted.

Hi, I’m Deborah Vogts, a Home-Style Country Cook, who enjoys Adventures in Baking and Entertaining. I’m a wife, mom, grandma, recipe blogger, lover of food, baker, and cook! To put it simply, I love dabbling in recipes and trying new foods. I invite you to join me on this recipe journey!
Learn More about Deborah
[email protected] 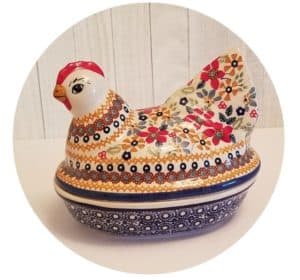 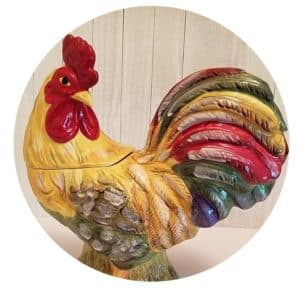